The basement is the home of the Replica of the Golden Dolphin(Kinshachi) and Structural Model of  Ogonsuii(Gold Water) Well.Next floor has weapon and the warriors armor during warfare.

RECASTING OF THE GOLDEN DOLPHINS

The golden dolphins were melted down and recast three times during the Edo
Era when the clan suffered severe economic hardship.When the dolphins were recast in Bunsei10(1827),the purity of the gold was greatly decreased.In order to conceal the diminished luster,openings in the mesh in the protective bird screens built around the dolphins were made smaller during the Kyouhou period(1716-1735).source Nagoya Castle Chronicles 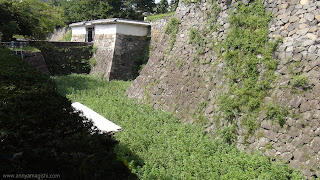 80 spam blocked by Akismet
We use cookies to ensure that we give you the best experience on our website. If you continue to use this site we will assume that you are happy with it.Ok