Had finally witnessed the magic at Nabana no Sato’s Winter Illumination and so glad we had it covered from the countdown itself and light switching on, firsthand! We always want to have a glimpse of it way, way back but the schedule won’t allow us, I am glad the opportunity came and grabbed and recorded it this time! 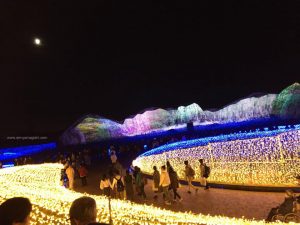 The theme for this year is the famous character “Kumamon” of Kumamoto Prefecture. It is in the south-west islands of Kyushu and is known for its agriculture and rich land. The illumination perfectly presented the place with Mount Aso, the Kikuchi River, and the Shirakawa river.

“Kuma”  in Japanese means bear thus the name “Kumamon” which translates as the bear thing. The character is being used to boost tourism in Kumamoto and it is successful up to this day, people from around the world love the character and buy products representing it.

Here is my take, why the character became the symbol theme for this year.

Kumamoto was hit by a powerful 6.2 magnitude earthquake on the day of April 14, 2016, that reportedly killed 49 people and sent thousands of people to flee for refuge in the streets!

Messages of concern all over Japan and across the world stating “Gambatte Kumamoto”  (be strong Kumamoto!) Thus the theme of this years illumination. Nabana no Sato’s Nagashima Onsen may be considered as an “ouen” or a message of hope for the place and the people of Kumamoto. (note: this is my own opinion only)